At the beginning of June, I attended the high-level United Nations conference, UN Stockholm 50+, which took place in Sweden. The event marked fifty years since the UN Conference on the Human Environment, the first gathering of global leaders to focus seriously on the world’s environmental issues, which took place in 1972.

Even back then, it was recognised that the situation was getting out of hand, and 114 heads of state signed a number of significant environmental resolutions. As a result of that 1972 conference, the United Nations Environment Programme was created.

Looking back, the world has changed a lot since then. Sadly however, we’re not in a position to boast about having delivered on the promises made. Yes, knowledge and technological capabilities have improved considerably. But the channelling of resources towards environmental protection and the levels of cooperation between organisations to deliver what has been agreed upon has been poor.

According to June’s conference report, in the past 50 years we have managed to achieve barely a tenth of the commitments made. This is not nearly enough.

When it comes to acute problems, the world has already seen how quickly agreements can be reached—whether it's restrictions for the Covid-19 pandemic, or sanctions for the war in Ukraine. Environmental issues, however, are like boiling frogs. If frogs sit in a pot of cool water whose temperature rises gradually up to boiling point, they don't notice the change, so they don’t jump out. As a result, they die. It's the same with environmental issues. Because the effects are seen gradually, we are like the frogs in the pot—failing to act despite the rising temperature.

The first facts about the impact of plastics on nature were established by scientists in the 1960s. It became clear that if we continued to produce plastic at the same rate, we would be faced with serious biodiversity loss. Sixty years on, it’s only now that we can say that the seriousness of the problem has dawned on everyone—species richness is declining at an alarming rate, plastic pollution is visible in nature, and microplastics have entered our food chain. Scientists estimate that the average person eats a credit card's worth of plastic a week. Plastic pollution is found in bottled water, beer and salt. We can no longer solve the plastic problem, but we can stop it from escalating further. Why didn't we start tackling the plastic problem when we could have avoided the disastrous consequences?

We were aware of the human impact on climate change even earlier. The Nobel Prize-winning chemist Svante Arrhenius described as early as 1896 (!) how, by burning enough fossil fuels, we influence the Earth's temperature. Unfortunately, we only started to address the issue when the devastating effects of climate change were already visible and having an impact on us.

Now, at the end of the first quarter of the 21st century, we find ourselves in a very serious situation. The consequences of our actions and inactions will be felt not only by our children's generation; we are already feeling the impact ourselves. We face a triple crisis: global warming, biodiversity loss and the waste crisis. The Stockholm 50+ conference made it very clear that we cannot hide behind our national borders to tackle environmental problems. The same slogan was echoed by multiple speakers: we can no longer work in silos, we must work together. As we did fifty years ago.

I have been to many, many international environmental conferences. At most of them, the participants have all been well-meaning people, and I’ve had little cause to doubt their sincerity. However, it is disheartening when event after event declares the need to solve environmental problems, but no tangible actions follow.

The only way to save our planet and ourselves from climate catastrophe is to act. But it is in exactly this—action—that we fail the most. Yes, we are acting, but not nearly fast enough to tackle the cumulative triple crisis we are facing.

We are better prepared for change than ever before. We have the knowledge, the skills, the growing public support, the green technologies, the international agreements, and even the financing agreements. Public opinion clearly shows that environmental issues need to be addressed urgently, and that people are increasingly willing to change their behaviour.

Clearly, we are not dealing with a climate and environmental crisis, but with a crisis of governance. To tackle the triple crisis, we need strong leaders who can set a clear direction and bring about change. Now is the time for every organisation to consider recruiting a change leader, because fundamental change is something that is needed everywhere. Leaders of change are needed in government, the public sector, business and communities. And making change can be fraught with difficulties. So above all, we need leaders with the vision and entrepreneurial drive to initiate and accelerate change on the necessary scale.

The next 8-10 years will be crucial. Either we will be able to change how we live, or we will find ourselves having to face up to the challenge of adaptation. That is, adapting to a new reality of extreme climate, floods and droughts, with their attendant large-scale famines, energy crises, great numbers of climate refugees, and conflicts over land and resources.

Our greatest enemies are ignorance and the desire to have someone else solve these grave problems for us. Unfortunately, the solutions are in our own hands.

When the temperature in the pot rises, it is not time to put on our beachwear. It is time to act. 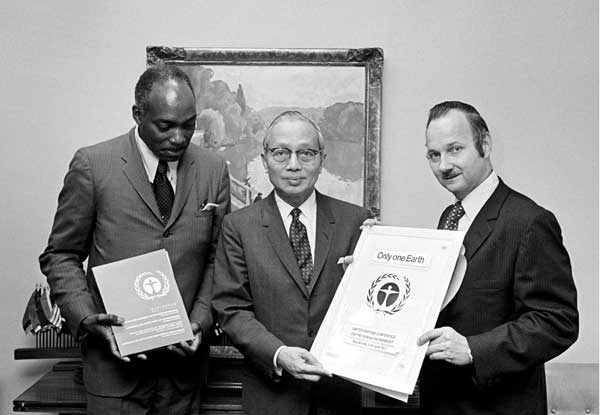 UN Stockholm 50+ marked fifty years since the UN Conference on the Human Environment, the first gathering of global leaders to focus seriously on the world’s environmental issues, which took place in 1972.